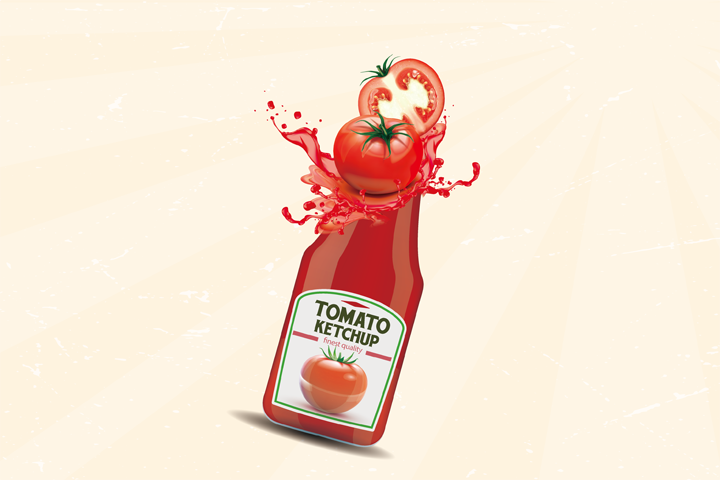 The Science of Ketchup: From Physics to Microbiology

Ketchup can be a struggle to work with. You may have seen the following when a ketchup bottle is taken out of the fridge. Try and fail to tip the ketchup out. Smack the bottle hard, many times, and wait even longer, and suddenly all the ketchup splashes out at once and you end up with much more than you need. Ketchup is a very versatile condiment – it goes well with all kinds of food – so everyone who uses it may have similar experience repeatedly. But why does this keep happening? And why does it happen with ketchup specifically?

Ketchup as a Fluid with Variable Viscosity

When we want the ketchup to be runny, it comes out of the fridge frozen and cold and decidedly not runny. At this point it may be described in physics terms as viscous, or difficult to flow [1]. Rather than waiting for it to thaw, most people will hit the bottom of the ketchup bottle sharply. Based on Newton's Law of viscosity, a fluid flows at a speed in proportion to the force applied. However, ketchup has the property of thixotropy [2]. It means that the extent to which ketchup becomes less viscous, or runnier, is disproportional to the applied force. Therefore, ketchup is also referred to as a non-Newtonian fluid [3].

Why is ketchup like this? In viscous fluids, molecules are unable to move freely, due to the attractive forces between them or because larger molecules act as physical barriers [1]. In the case of ketchup, 95% of which is made of small molecules like water, vinegar (ethanoic acid) and salts [2], but ketchup is thixotropic because of the precise nature of that other 5%.

Ketchup contains several types of large sugar molecules (polysaccharides) which make up the remaining 5% of its content [1]. The most important is pectin, which is present in tomatoes (and most other fruits and vegetables) as a "sticky" polysaccharide that helps to bind the cell walls together [1]. When breaking up the skins and other tomato solids during the process of making ketchup, pectin is released to the pulp [3]. Pectin and other fiber molecules then form a matrix of large molecules held together by electrical charges between them [1]. This also means that small polar molecules, including water, can't travel as easily as before because of their intermolecular attractions to the matrix [1]. And when it's difficult for them to flow, ketchup becomes viscous.

You may see a layer of water appear when ketchup is left alone for long periods. Excess water can eventually separate out of this molecular matrix on its own; this is known as leaching [1]. What you need to do is to shake to homogenize it – to redistribute the molecules of the ketchup. But remember, the fluid is a non-Newtonian one. When you shake it or smack the bottom of the bottle, the force applied will break the molecular interactions holding this matrix together and allow the water in the fluid to flow more quickly, at a speed out of proportion to the force applied!

The Secret Behind Its Long Shelf Life

These properties are direct consequences of ketchup's historical development after the introduction of tomato to the recipe. Let's explore the secret behind the long shelf life of ketchup. From its origins as a fermented fish sauce in China and Southeast Asia (where the Hokkien Chinese word kê-tsiap gave the sauce its name [4]), and after tomatoes became the latest in a long line of ingredients used in its production, ketchup was well-known for its stability of up to a year [4, 5]. A common technique for extending its shelf life was to add acid to inhibit microbial growth, so the early ketchups without tomato were also sour [5]. Entering the era of tomato ketchup, chemical preservatives were once added to the early commercial formulas to preserve the products [4]. However, by the late 19th century several manufacturers and scientists became convinced that the widely used preservative sodium benzoate was unsafe [4]. This motivated Henry Heinz and his company to search for a preservative-free ketchup [5, 6].

As other food scientists discovered [5], the key lay in the ripeness of the tomatoes used and the addition of more solutes. Ripe tomatoes contain more pectin and pectic acid, which are created by enzymatic reactions during the ripening process. Not only did the higher pectin content thicken the ketchup, the technique that Heinz adopted also called for the addition of more salt, sugar and vinegar [5], which did several things. The pectic acid and vinegar made ketchup more acidic. The addition of solutes like salt and sugar reduced the ability of water molecules to move, not just within ketchup, but also into microorganisms for the biological reactions necessary to support their growth [7]. Both effects inhibit microbial growth synergistically and prevent spoiling without resorting to preservatives. As a bonus, the riper tomatoes and added vinegar and sugar made ketchup both sweeter and sourer [8], giving it its distinct and much-loved flavor.

It turns out additional tricks can be applied to the bottle for holding the ketchup, in order to facilitate a "smooth pour" [9]. But that will be the topic of another story.