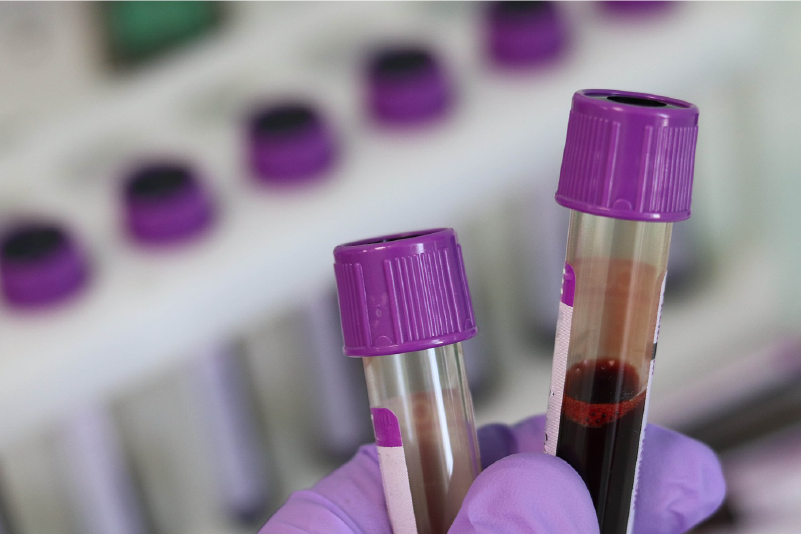 Cancer is undoubtedly one of the most dreaded maladies known to humans. It is defined as a condition where cells proliferate uncontrollably [1]. Besides surgery, conventional cancer treatments include radiotherapy and chemotherapy that aim at selectively killing cancer cells. However, this is often accompanied by unwanted side effects, as these therapies tend to kill off healthy cells as well [2]. Fortunately, recent developments of immunotherapies allow us to fight cancer in a more precise manner, with our own immune system. Enter the Chimera – the renowned chimeric antigen receptor T cell (CAR-T cell) therapy, a man-made hybrid created for the sole purpose of eradicating cancer. The idea of this therapy is to extract a type of immune cell known as T cells from the patient, genetically engineer them into CAR-T cells in vitro, and infuse the transformed cells back into the patient’s body. With the newly gained ability to recognise and attack cancer cells, CAR-T cells are almost like a "living drug" against cancer, fighting them off cell by cell!

Also known as killer T cells, one can infer from its name that this cell type kills other cells ("cyto-" meaning cell and "toxic" implying lethality). Cytotoxic T cells usually kill cells that are damaged, as their continued existence is undesirable for the body, such as virus-infected cells which are hijacked to shelter and replicate the pathogen. The major task of the T cell is to distinguish damaged cells from healthy cells, kill the former and spare the latter. The identification is enabled by a T-cell receptor (TCR), which recognises an antigen presented on the surface of damaged cells but not healthy cells. When bound to an antigen, the TCR sends signals to activate the T cell so that it will be triggered to kill the damaged cell by inducing cell lysis1.

Fact Number 2: Antibodies are Produced by Another Class of Immune Cells Called B cells

Plasma cells, which are differentiated from B cells, produce proteins called antibodies. Shaped like a "Y", antibodies have the trademark function of being able to bind specifically to its corresponding antigen using the two tips of the "Y". Known as variable regions, the pairs of tips vary vastly among different antibodies, defining the target of an antibody and conferring an "identity" on it. On the contrary, the remaining part is known as the constant region; the same constant regions may be shared by different antibodies.

Upon being bound by antibodies, the antigen itself (sometimes toxins) or the unwanted entities with the antigen on surface (such as cancer cells or pathogens) will be recognised by other immune cells, which may swallow them whole in a process called phagocytosis. However, this system is not perfect. In the case of cancer cells, they are not always recognised as the enemies within our bodies. 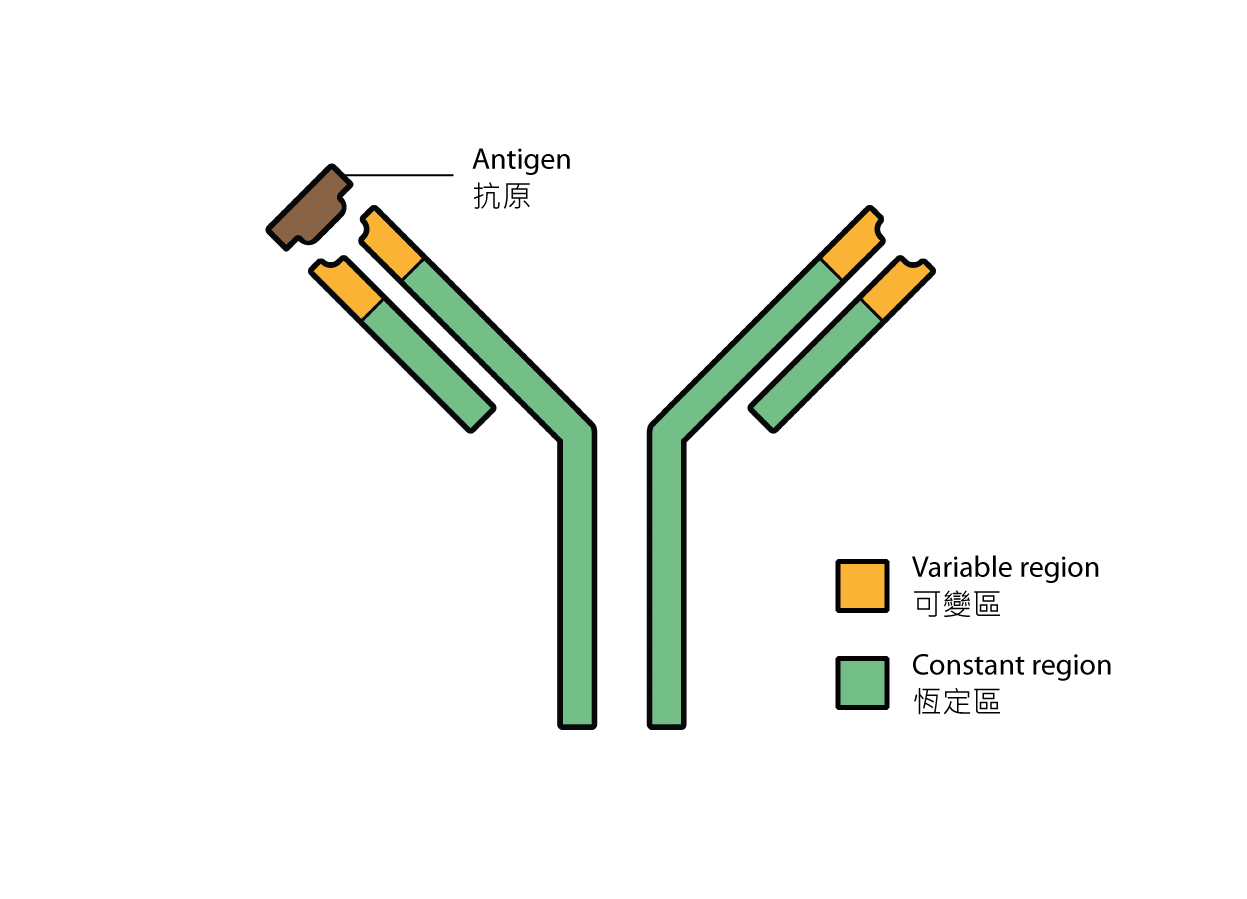 Figure 1. Structure of an antibody.

In fact, the CAR-T cell derives its name from the Chimera, a fire-breathing hybrid creature merged from a lion, a goat and a snake, in Greek mythology. The CAR-T cell is literally the merged form of cytotoxic T cells and antibodies. It utilises a chimeric TCR to identify cancer cells. The word "chimeric" describes the fusion of several protein domains (parts of proteins) sourced from different proteins, that have distinct functions. 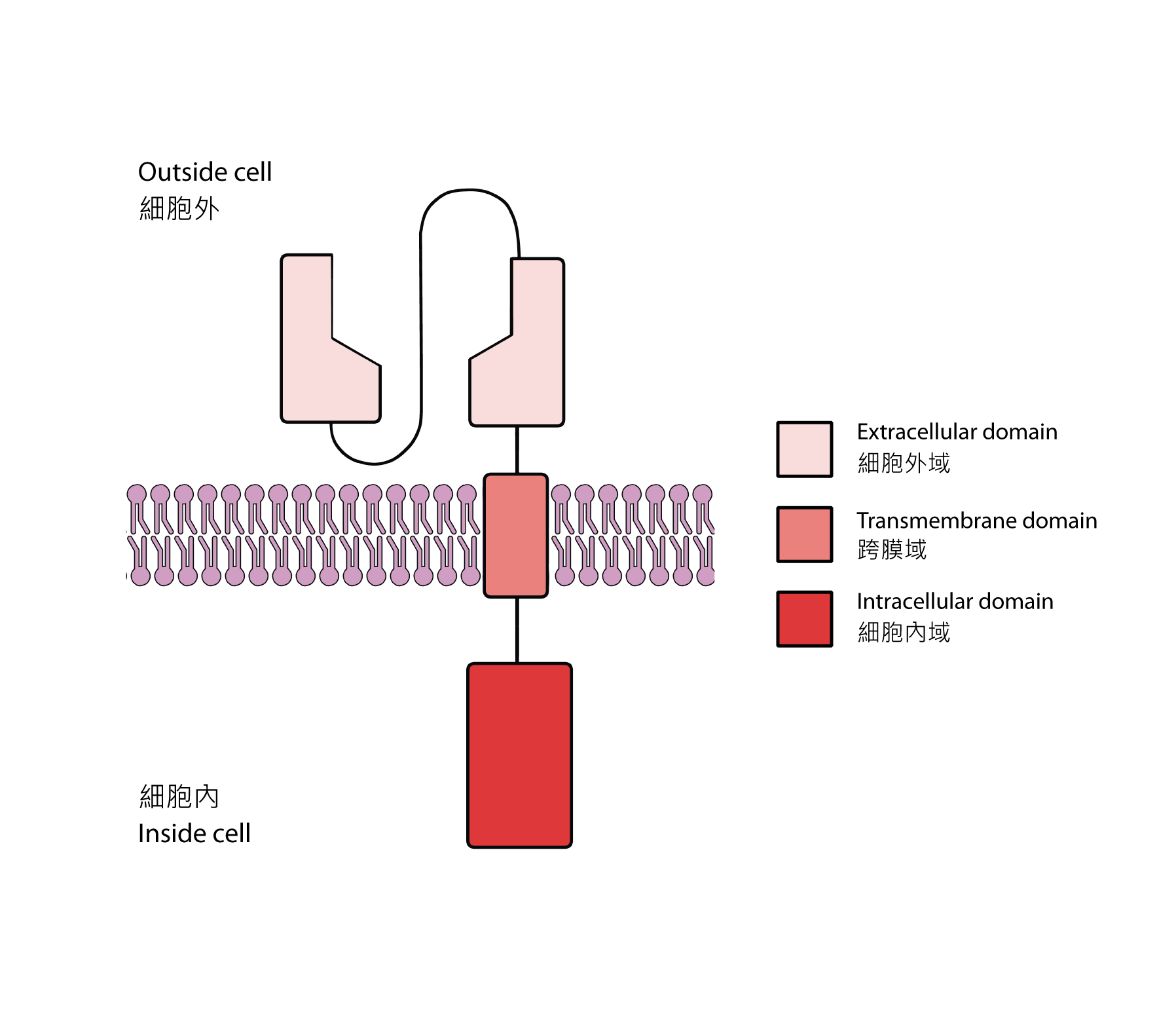 "Assembling" Our Weapon from Scratch

So, how do we actually create CAR-T cells? Once the desired protein domains have been chosen, we will fuse their respective DNA sequences together and integrate them into the genome of a T cell sourced from the patient’s own body by some genetic engineering techniques in a lab. This brings CAR-T cells into existence because the cells will now be able to produce the customised weapon (the said chimeric receptor) with our lines of commands (the DNA sequences). The CAR-T cells are re-delivered back into the patients’ body afterwards as a "iving drug".

Given its potential to cure cancer, CAR-T cells have undergone many clinical trials to test its effectiveness for various types of cancer. According to a study from the University of Chicago [4], the success rate of CAR-T cell therapy is currently at 30 to 40% for long-term remission of some cancers.

While potent, there are certainly many challenges in perfecting CAR-T cell therapy. One problem is on-target off-tumor toxicity. As mentioned, tumor-associated antigens are not exclusive to cancer cells and may be present on the surface of healthy cells. This sometimes leads to a safety issue, when CAR-T cell targets the antigen on a healthy cell by mistake. Other challenges presented lie in the tumor microenvironment (TME), where the cancer cells reside, that may suppress the function of CAR-T cells [5]. Even now, scientists are working hard to improve upon these weaknesses, with more advanced versions of CAR-T cells popping up frequently. Some of the notable improvements include adding logic gates3 to CAR-T cells to increase specificity and safety [6], while some aim to counter the immunosuppressive TME with supplementary molecules such as immune checkpoint inhibitors, to avoid the cancer cells from circumventing the assault of CAR-T cells by "cheating" [7].

What is an immune checkpoint inhibitor?

From the passages above, you can learn that once the antigen is bound to the TCR, the T-cell will be triggered to kill the cancer cell. However, as a counter mechanism to prevent over-activation of an immune response, it was discovered that an additional regulator, immune checkpoint, can override this decision and spare the target cell [8]. Harnessing this discovery, the novel checkpoint inhibitor immunotherapy, which earned its discoverers a Nobel Prize in 2018, employs inhibitors to block the checkpoints expressed by cancer cells, so that ideally, they cannot be spared.

Owing to its reputation as the programmed cancer killer, CAR-T cells have garnered much attention in recent years. Where humans have traditionally relied on chemical drugs, CAR-T cells represent a new class of "living" drugs. Immunotherapy, which includes CAR-T cells, is set apart from other therapies because such treatments utilise our own immune system to fight against diseases. In truth, the immune system has always been a faithful guardian, defending our body from diseases all the time, sometimes even without us noticing; it is only fitting that, with the help of an innovative upgrade, it can be used to dispatch rebellious cells that turn cancerous. Hopefully, this will prove to be a more effective therapy, with substantially less side effects, bringing humans one step closer to curing cancer effectively!

1 T cells can effectively kill the target cell by releasing proteins that poke holes on its plasma membrane, causing a cell to burst, known as cell lysis. 2 For the chimeric one, it is more often referred to as chimeric antigen receptor (CAR) instead of chimeric T-cell receptor. However, they refer to the same thing but just named from different perspectives – a receptor on T cells versus a receptor which binds to antigen. 3 Logic gates perform logical operations and produces outputs according to inputs it receives.