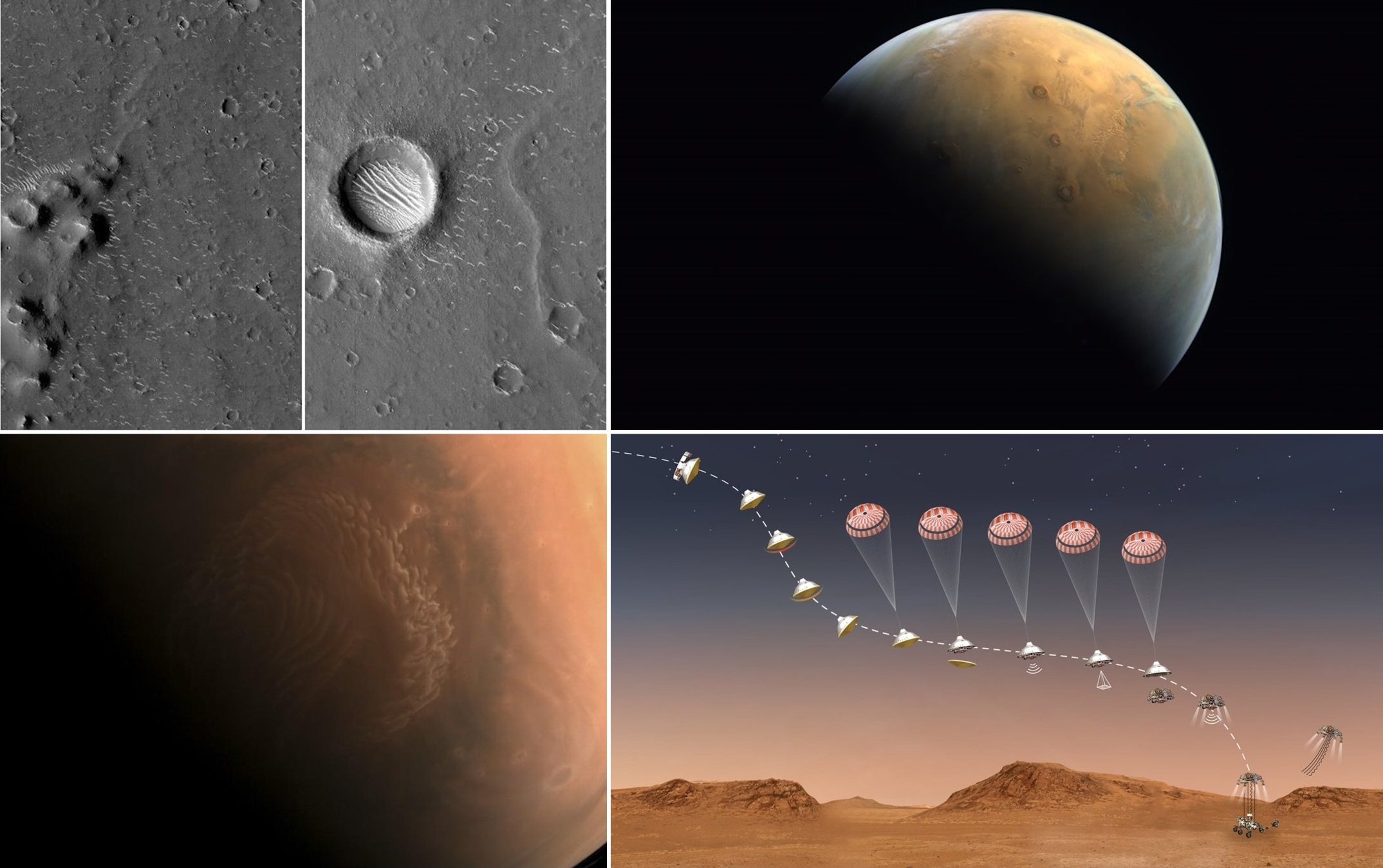 We mentioned in previous issues of our newsletter, that China, the UAE and the US had successfully launched their Mars probes during the launching window in July last year. After more than half a year of space travel, the three Mars probes, namely, "Tianwen-1" of China, "Hope" of the UAE and "Perseverance" of the US have arrived their destinations and started their mission. In this issue, we will introduce these probes’ current status and the next step of their exploration missions.

"Tianwen-1" of China decelerated on 10 February 2021 HKT and was successfully captured by Martian gravity and entered Martian orbit. It then entered the "parking orbit" after the plane change manoeuvre on the far side of Mars on 15 February and made two orbit adjustments on 20 and 24 February. CNSA released three high-definition photos of Mars taken by "Tianwen-1", including two black and white photos and one colour photo (see above on the left).

"Tianwen-1" will orbit Mars for about three months, the scientific instruments onboard including medium-resolution camera, high-resolution camera and spectrometer etc., will start surveying Martian topography and weather and prepare for Mars landing scheduled in May this year.

"Hope" of the UAE decelerated on 9 February 2021 HKT at night and was successfully captured by Martian gravity and entered Martian orbit at midnight. "Hope" took a photo of Mars on 10 February from an altitude of about 25,000 kilometers above the surface of Mars. The photo clearly shows North Pole of Mars and Olympus Mons, the largest known volcano in our solar system (see above upper right). "Hope" will orbit Mars for at least two years, using three sets of scientific instruments to analyse data of the Martian atmosphere, especially the neutral atomic activity of hydrogen and oxygen which forms water in the lower and upper atmospheres. The first batch of data is expected to be announced in September this year.

"Perseverance" of the US entered Martian atmosphere at about 4:48 am HKT on 19 February. It overcame the "7 minutes of terror" and successfully landed on the Jezero Crater located at the north of Martian equator. This 7-minute was the approximate time from entering Martian atmosphere to Mars landing. The probe first entered Martian atmosphere at a high speed of about 19,000 kilometers per hour, then opened a large parachute to decelerate. Finally, it activated the "Skycrane" about one minute before landing and the probe was rappelled and landed successfully (see above bottom right).

The mission of "Perseverance" is to search for signs of ancient life and collect rock and soil samples in the Jezero Crater. Collected samples will be stored in metal tubes which will be left on the spot while the probe continues its mission. According to the plan, after 2026, a fetch rover will be launched to Mars to collect the tubes and put them in a safe container. The fetch rover will then use a Mars Ascent Vehicle to launch the samples container into Martian orbit. Finally, a return orbiter will capture the container from Martian orbit and bring back the container with the samples to Earth in 2031 at the earliest.

The probes from the three nations have their own missions, but all of them are trying to study and learn more about the red planet. Exploring Mars was never easy and scientists are working hard to overcome different challenges. We hope that with more experience in exploring Mars and technology breakthrough, future Mars missions will be even more successful!