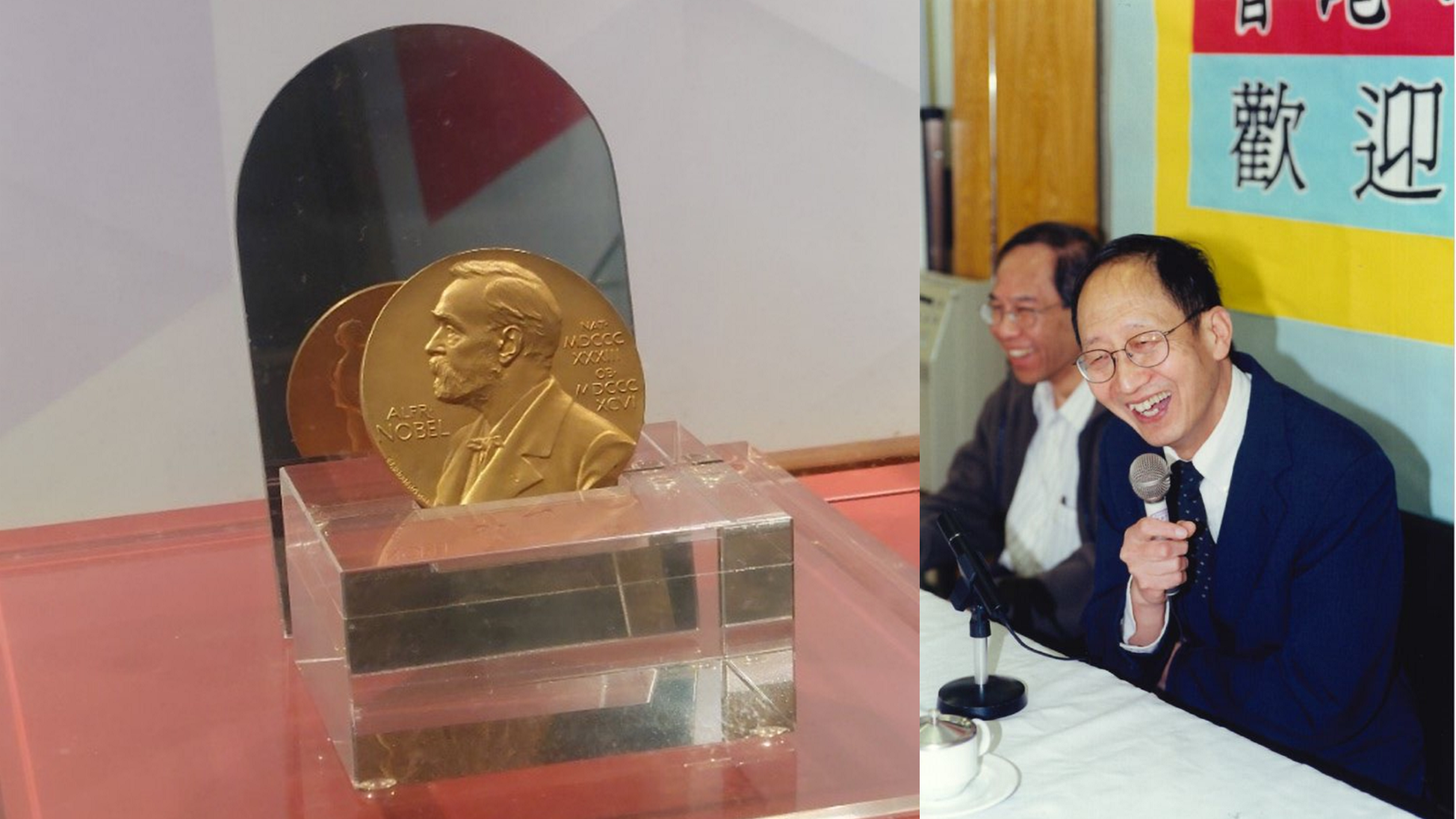 In the 12th issue (November 2021) and 14th issue (March 2022) of this newsletter, we featured two Nobel Laureates in Physics, Professor Yang Chen-Ning and Professor Charles Kao respectively, introducing their outstanding scientific achievements and their close relationship with Hong Kong over the years.

In this issue, we will introduce another Nobel Laureate in Physics - Professor Daniel Chee Tsui, who also has a long-standing relationship with Hong Kong, for his outstanding research in the electrical properties of thin films, microstructures of semiconductors and solid-state physics and his secondary school years in Hong Kong.

"I tend to partition my life into three compartments: childhood years in a remote village in the province of Henan in central China, schooling years in Hong Kong, and the years since I came to attend college in the United States," said Daniel Chee Tsui, the 1998 Nobel Laureate in Physics, in the autobiographical sketch published by the Nobel Foundation[1].

Childhood in a Remote Village

Daniel Chee Tsui was born on 28 February 1939 in the midst of the Sino-Japanese War, in Fan Village, a less developed area in Henan Province plagued by droughts, floods and war.

Like most of the villagers of the time, his parents were both illiterate and had never had the chance to learn how to read and write. Despite the multiple difficulties they faced in their drought-prone, war-torn village, his parents went to tremendous lengths to care for their children. "They suffered from their illiteracy, and their suffering made them determined not to have their children follow the same path at any and whatever cost to them," said Tsui in his autobiographical sketch[2].

Tsui received his primary education in a local school and completed his primary school life at the age of ten. Since there was no middle school in the area, he could only drop out to help his parents with farm work until age 12. In early 1951, his parents made the tough decision to send him to Hong Kong for a better education, neither he nor they knew how far it truly was. Regrettably, he never had a chance to see his parents again after this move as they passed away in the 1950s and 1960s respectively.

Hong Kong was the place where he discovered the joy of learning and began to develop deep, long-lasting friendships with others. To Tsui, Hong Kong seemed more like home as he once said, "Home does not necessarily mean a house. Home is a feeling of warmth rather than a place."[3].

Leaving his hometown at the age of 12, Tsui proceeded to live with his two other sisters in Hong Kong. He began his formal education at the sixth-grade level and found it difficult to learn Cantonese. His schoolmates helped him by offering him their friendship, bringing him into their circle and letting him join their out-of-class activities. In his second year in Hong Kong, he attended Pui Ching Middle School, which was known for its performance in natural sciences subjects and from where many well-known scientists like Shing-Tung YAU, Alfred Cho, Yum-Tong Siu, Lu-Jeu Sham graduated. Tsui described school teachers at that time were "overqualified", as they would have been distinguished academics and scientists because they were all from China's leading universities, such as Peking University.

"The upheaval of war in China, however, forced them to hibernate in Hong Kong teaching high school kids. They might not have been the best teachers pedagogically, but their intellects and their visions inspired us. Even their casual remarks and the stories from their romantic reminiscences of the glorious days at Peking University could leave indelible marks on us. It was they, I think, who in their unconscious ways dared us students, living in a highly commercialised city, to look beyond the dollar sign and see the exploration of new frontiers in human knowledge as an intellectually rewarding and challenging pursuit," exclaimed Tsui[4].

Tsui shared some joyful moments with his classmates during his time at Pui Ching Middle School, like speculating on the examination questions, giving their teachers nicknames and even stealing lychees at Tsuen Wan lychee fields. His classmates made the following remarks about him in their graduation yearbook in 1957: "A height of six feet, among the tallest. Extremely gifted, excelling in classes. Proficient in Chinese, English, and Mathematics. Yet, he is negligent in minor matters. He sometimes took a nickel as a quarter. When he writes, his pen flies and dances. With scripts and calligraphy like messy blades of grass. When he conducts, his hands and feet swing like kung-fu masters, but when he sings, his tenor voice moves others, with a poise and charisma that impress the audience. The darling treasure of his 'Ai' Class. Faithful follower of Jesus Christ."[5] Kwong-Tak Chang, retired principal of Pui Ching Primary School, also said Tsui gave others the impression of a modest gentleman with no hint of self-importance or vanity. 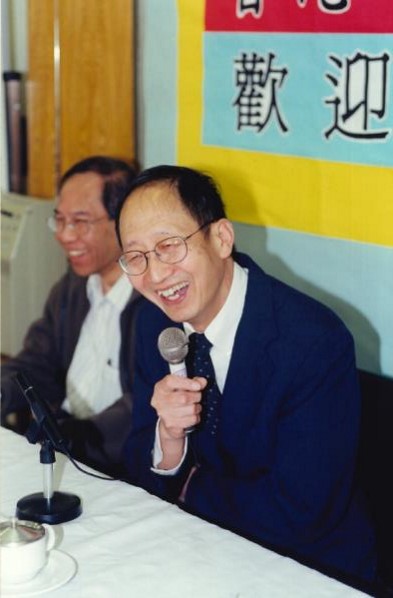 Tsui gave others the impression of a modest gentleman with no hint of self-importance or vanity.

Upon graduation from Pui Ching Middle School and passing the Chinese High School Certification Examination with distinction in 1957, he decided to enroll in the Special Class Centre set up by the Hong Kong Government for a 2-year matriculation programme, which aimed at preparing top-notch Chinese high school students for admission to the University of Hong Kong (HKU), instead of accepting an offer from the medical school of National Taiwan University. It was not an easy task for a Chinese middle school graduate to be admitted to HKU, given that The Chinese University of Hong Kong and other universities were yet to be established. HKU was the city's only university, with around 4,000 students, about 0.1% of the population of Hong Kong.

While studying hard for his entrance examination, exciting news came from afar – Yang Chen-Ning and Lee Tsung-Dao were jointly awarded the Nobel Prize in Physics in 1957 – this greatly impacted Chinese students of the generation, including Tsui, heightening their determination to study physics. In late spring of 1958, he received a full scholarship to Augustana College, his church pastor's Lutheran alma mater, in Rock Island, Illinois, United States and spent three years there. Tsui described those three years as the best of his life as he was free to read, to learn, to think through things, to wrestle with his Lutheran faith at his own pace and make some sense out of his life experience for the first time.

Years in the United States 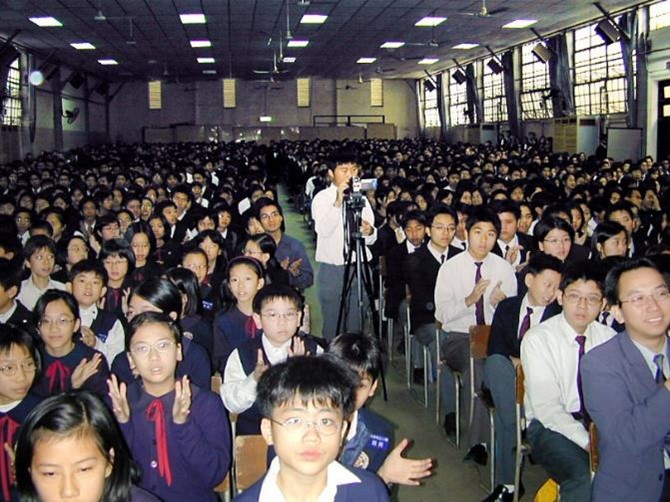 "Chat with your mentor – Daniel Tsui" 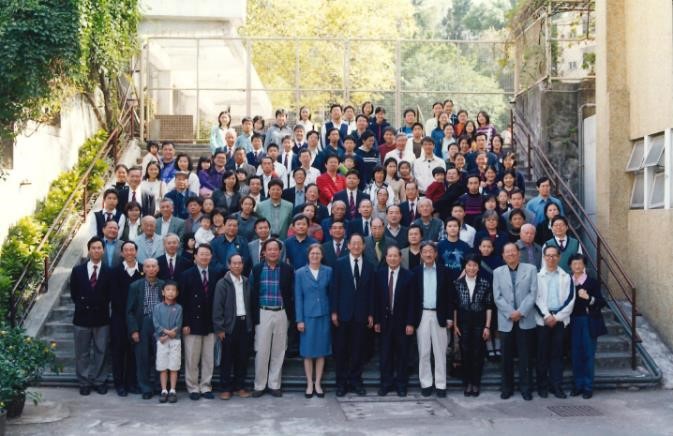 Group photo of Daniel Tsui, his wife and a group of Pui Ching alumni 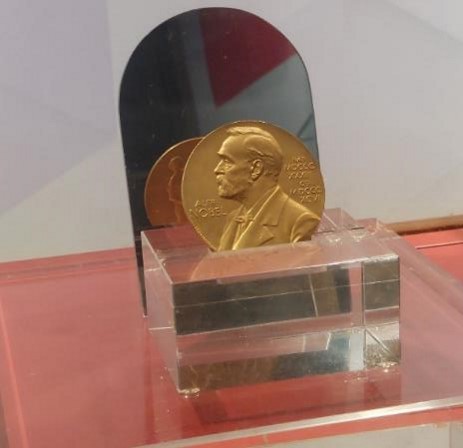 When Tsui, a Chinese man who grew up in Hong Kong, was awarded with the Nobel Prize in Physics in 1998, news congratulating him for winning one of the most prestigious awards in science could be heard everywhere and his alma mater published all Tsui's minor acts when he was back to Pui Ching Middle School in its newsletter. It is no surprise that Tsui brings joy and encouragement to Hong Kong and his alma mater, and helps inject new impetus into Hong Kong's scientific community. 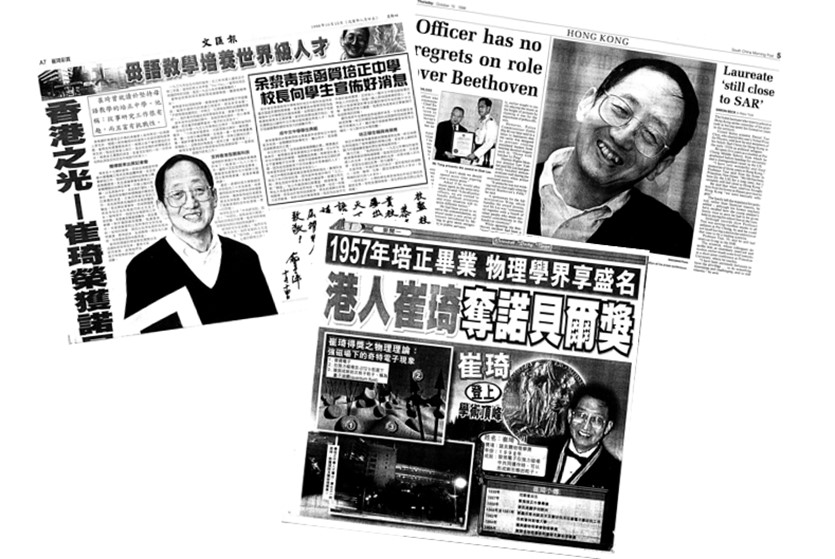 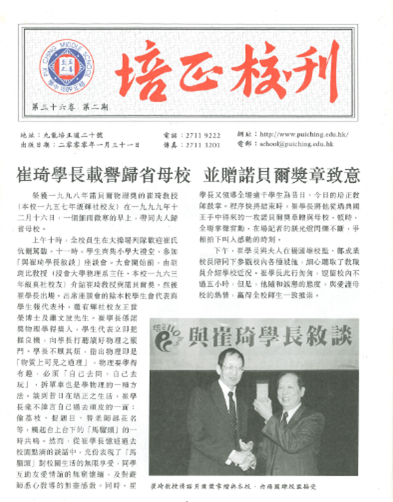 Yet, is fame important to Tsui? Lan Yang, a Chinese media proprietor, recalls, "I once interviewed Tsui at Princeton University and asked him a leading question, 'If your mother didn't insist on sending you to school, what would you be like today?’ I was expecting an answer like 'knowledge can change one's fate'. Yet, he responded 'I would rather be an illiterate farmer, as long as my parents didn't starve to death.'"[8]. Maybe fame is important to some people, but to Tsui, perhaps the bonds and the connection between people are what he treasures most!