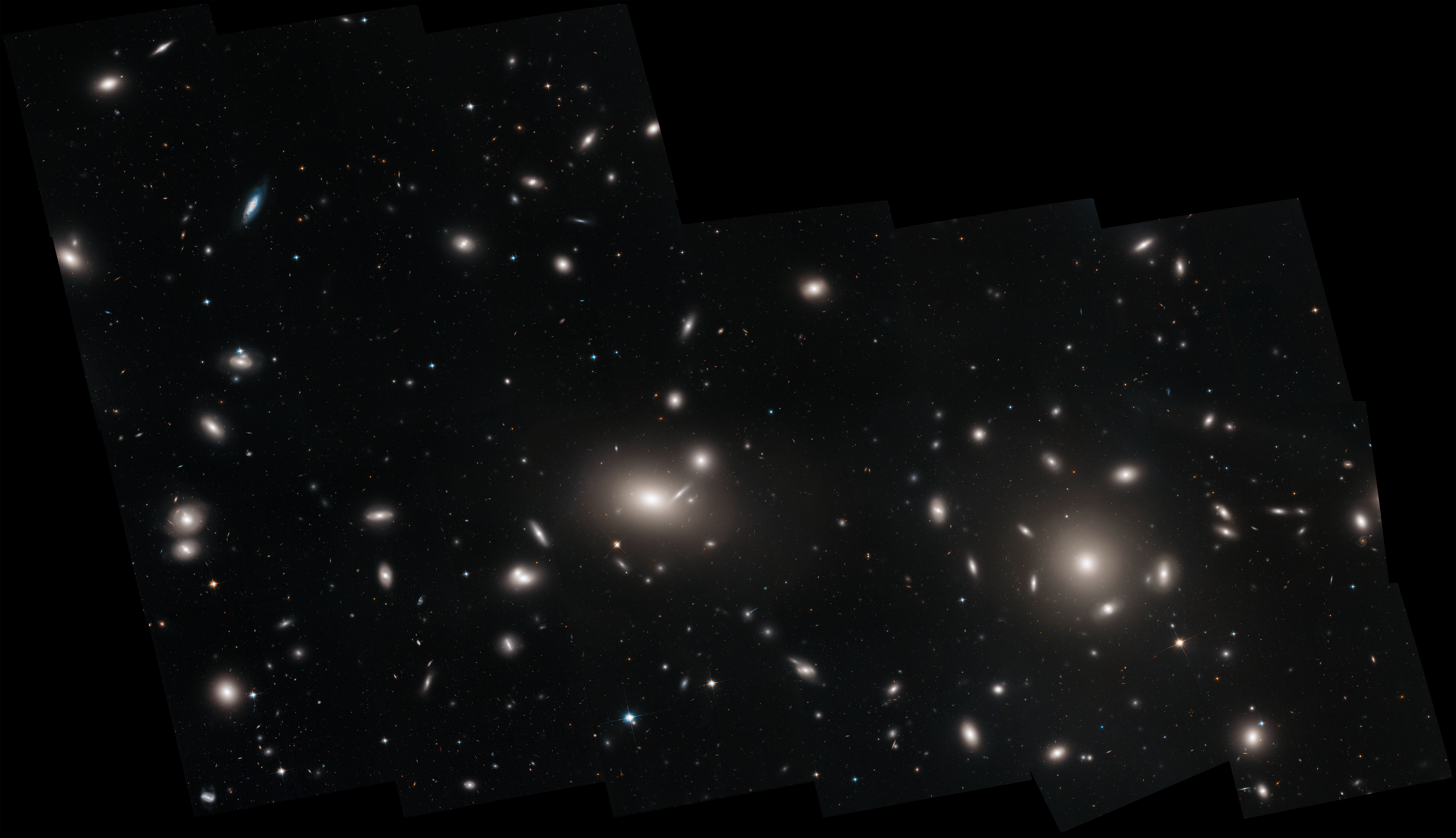 If you have done star-gazing, you probably would have enjoyed and admired the majestic arrangements of stars into galaxies (Fig. 1). Our Sun is a typical star in the Milky Way, our home galaxy, a typical galaxy in the universe. The hundreds of billions of galaxies in the observable universe group into galaxy clusters, forming even larger structures (Fig. 2). Other than stars, what constitutes a galaxy? How did galaxies and galaxy clusters form? How did these structures emerge from the almost perfectly uniform distribution in the early universe? These are just some of the questions that scientists want to answer. It turns out that a mysterious form of matter, called dark matter, plays a crucial role in all these questions. 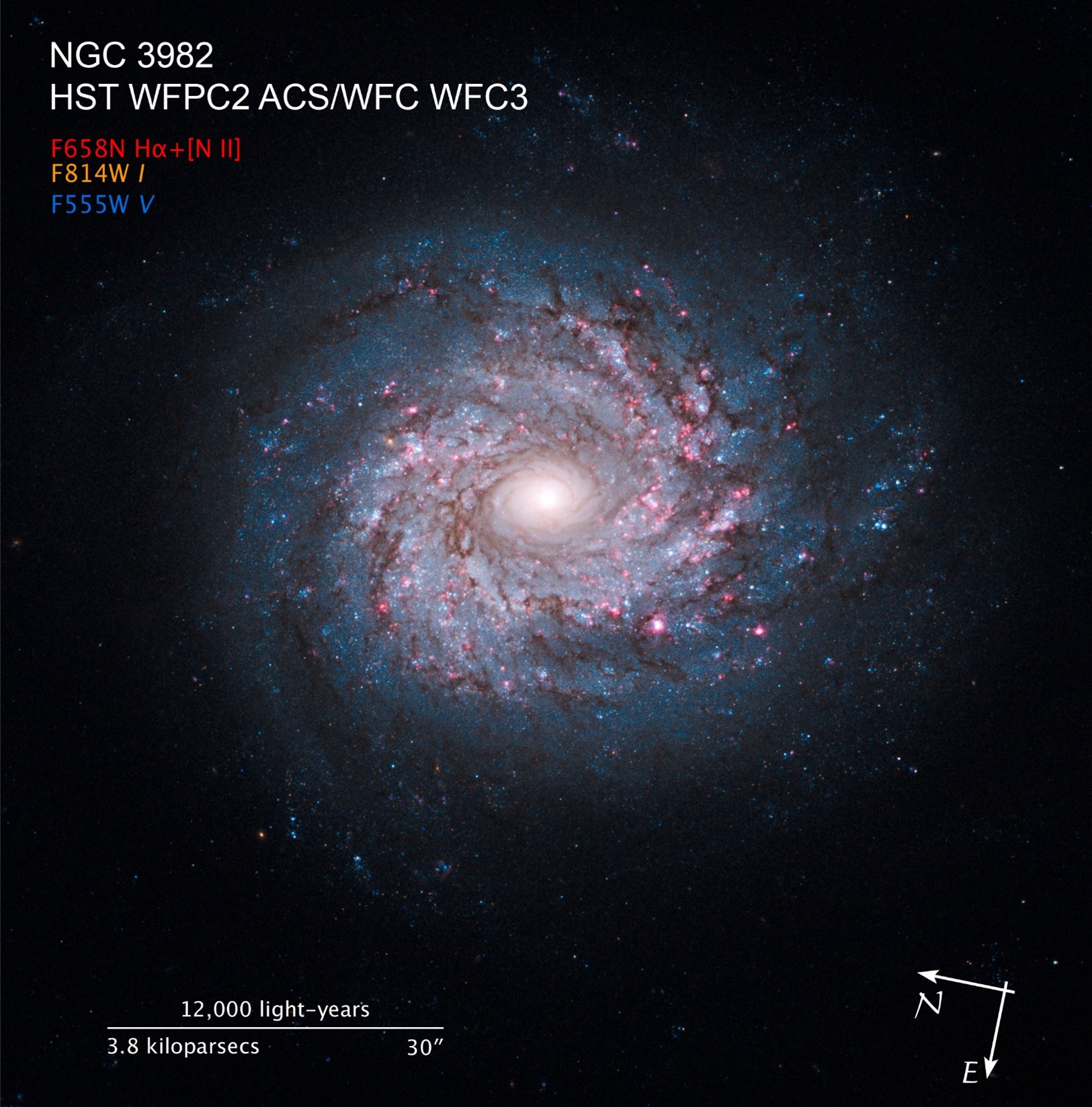 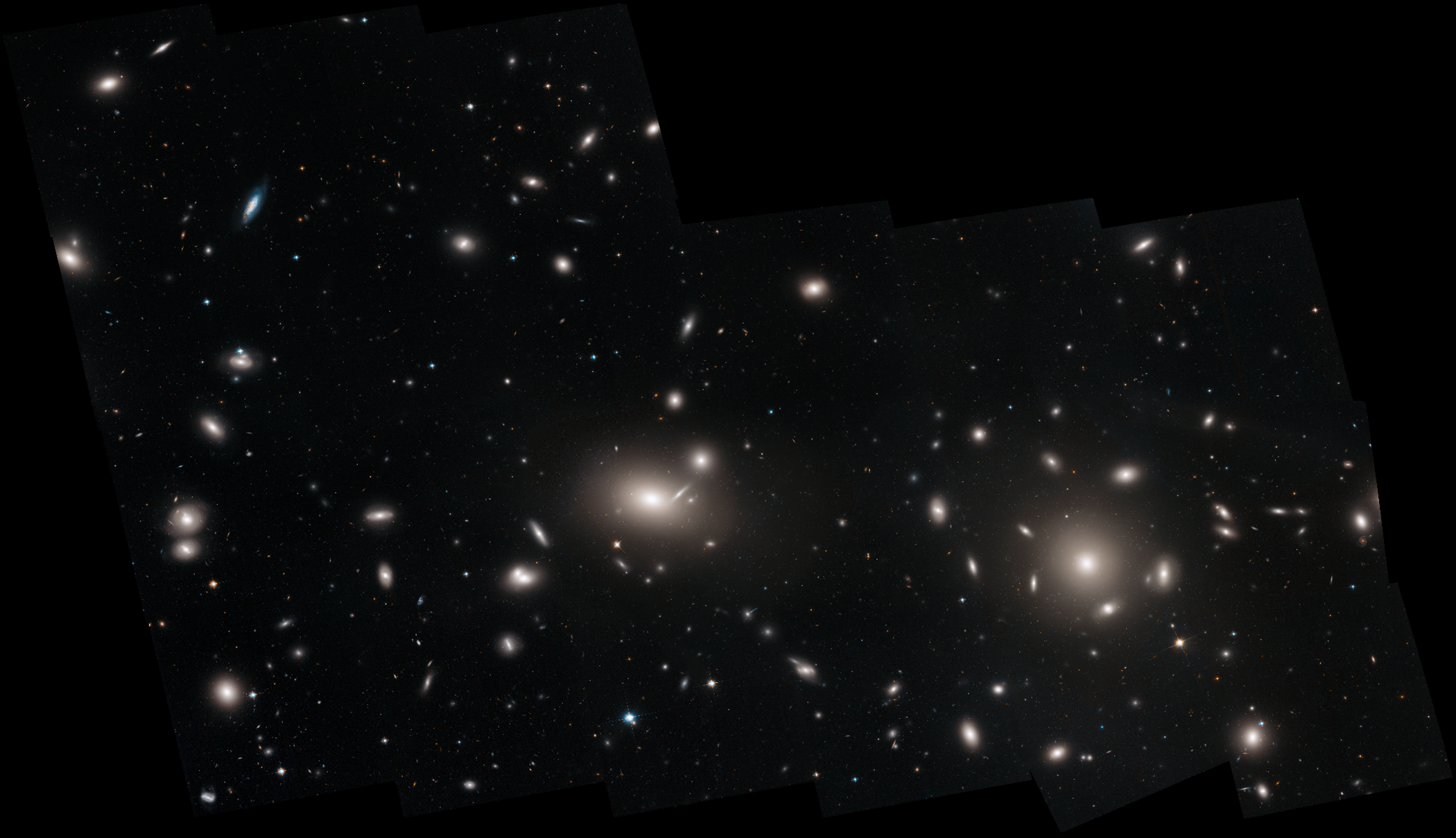 Fig. 2 Coma Cluster, a typical and nearby galaxy cluster made of thousands of galaxies.
Credit: NASA/STScI.

In the 1930s, Astronomers Zwicky and Smith tried to measure the mass of the Coma and Virgo Clusters, two relatively nearby galaxy clusters. Their reasoning goes like this: the mass of a galaxy cluster is proportional to its gravitational pull on the galaxies, which the orbital speeds would reveal. After carefully measuring the motions of galaxies, Zwicky and Smith were surprised to find that Coma and Virgo Clusters should be much more massive than the visible matter (stars and gas). In other words, there must be a lot of 'Dunkle Materie’, or dark matter, which gravitates but doesn't emit light. Applying the same idea, Vera Rubin measured the rotation curves of galaxies – the orbital speeds of stars and gas at different distances from the galactic center (Fig. 3). She found that the rotation curves of most galaxies do not decrease even at large distances, indicating that the gravity at the outskirt of a galaxy is not weakening, even though almost no visible matter can be observed there. This observation strongly suggests that a much larger dark matter halo engulfs the visible matter. For example, the dark matter halo of the Milky Way extends to at least 4-5 times the radius of its luminous disk, containing a total mass 5-10 times that of visible matter. 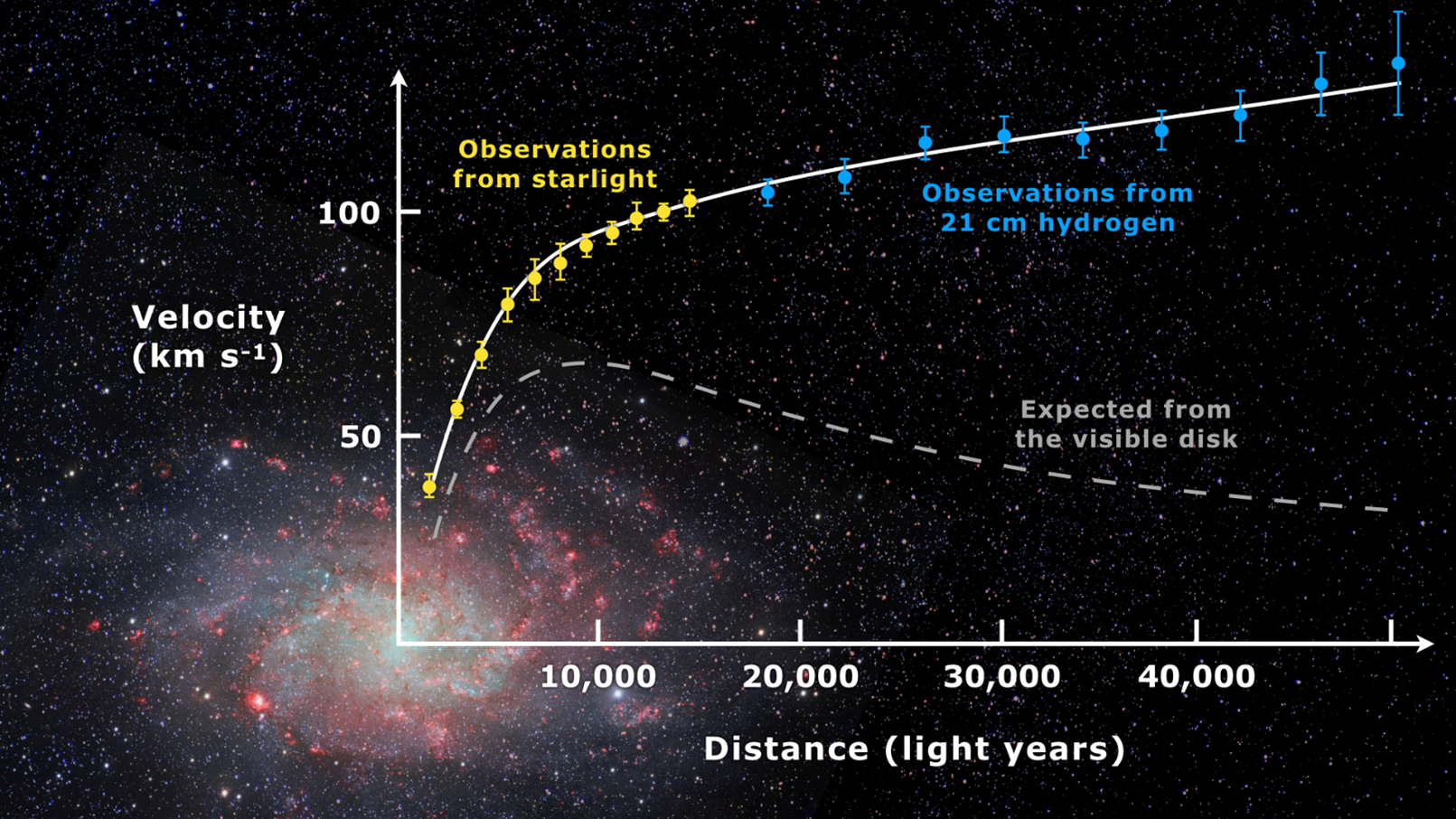 Fig. 3 Rotation curve of galaxy M33. The measured orbital speeds of stars and gas (yellow and blue data points) continue to rise beyond the luminous disk where most of the visible matter reside. This indicates that dark matter extends to at least 4 times the radius of the luminous disk, forming the dark matter halo.
Credit: Mario De Leo. CC BY-SA 4.0.

In recent years, many independent observations have confirmed the existence of dark matter in the universe. Some examples include those of galaxy or galaxy cluster collisions. Since the typical separation between neighboring galaxies is only a few times their size, it's not surprising to find that many galaxies would collide with each other (Fig. 4). Astronomers found that long tidal tails are drawn out from the galaxies in many such events, reflecting the presence of the dark matter haloes. Fig. 5 shows the famous Bullet Cluster, which is believed to form after two galaxy clusters collided. The visible matter, mostly hot gas, dragged on each other because of friction and became so hot that X-rays were emitted and detected by the Chandra X-ray telescope. On the other hand, dark matter passes through matter without slowing down since they do not interact much. Through gravitational lensing – the bending of light by gravity – astronomers can map out where most of the mass is, thereby revealing the dark matter. The separation of dark matter from the visible matter in the Bullet Cluster shows us that the dark matter interacts weakly only, if at all, and is quite different from the normal, visible matter. 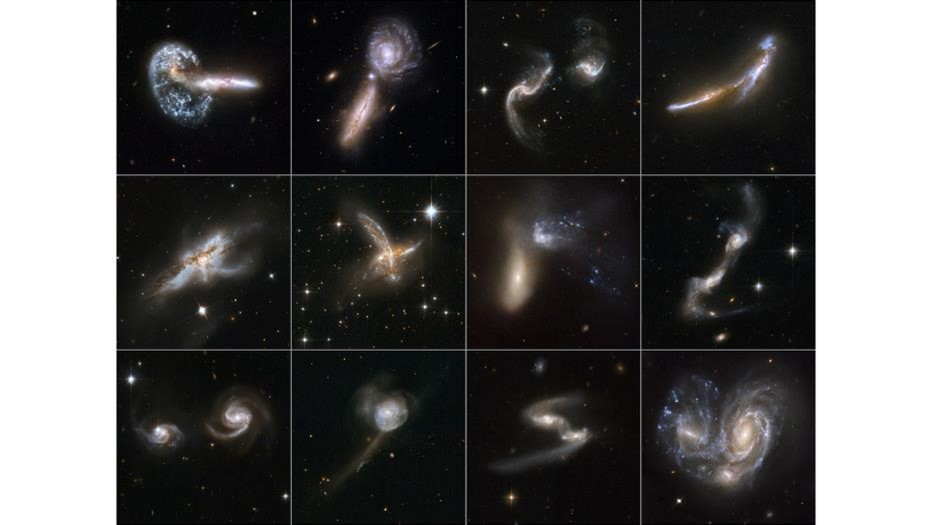 Fig. 4 Examples of colliding galaxies. In many cases, long tidal tails are drawn out, indicating the presence of the dark matter haloes.
Credit: NASA, ESA, the Hubble Heritage (STScI/AURA)-ESA/Hubble Collaboration, and A. Evans (University of Virginia, Charlottesville/NRAO/Stony Brook University). Fig. 5 Bullet Cluster, believed to form after a galaxy cluster punches through another one. The red-coloured regions contain the visible matter, which become so hot that they emit X-rays detected by the Chandra telescope. The blue-coloured regions indicate most of the mass revealed by gravitational lensing. The collision between the two galaxy clusters separate the visible and dark matter.
Credit: X-ray: NASA/CXC/M.Markevitch et al.; Optical: NASA/STScI; Magellan/U.Arizona/D.Clowe et al.; Lensing Map: NASA/STScI; ESO WFI; Magellan/U.Arizona/D.Clowe et al.

Through many independent observations, scientists now know that the universe's matter content is dominated by dark matter, an unknown form of matter that undergoes gravitational and perhaps weak interactions, but not electromagnetic or strong interactions. They are therefore invisible to us, but they play an essential role in providing strong enough gravity to form the structures of the universe (Fig. 6). We would not have the many galaxies and galaxy clusters we can see today without dark matter. However, we know very little about dark matter. On average, the ratio of dark matter to normal matter is about 6 to 1. So even if we understand all the atoms and electrons, they only represent a small fraction of matter in the universe. This is both humbling and exciting – we are so ignorant, and there is so much more to discover! Understanding the nature of dark matter is one of the most important open problems in astrophysics, cosmology, and particle physics.

Fig. 6 Galaxies are the visible part of matter distribution in the universe (left and middle). These structures are formed and embedded in dark matter haloes, which form an invisible cosmic web (right).

Dark matter interacts extremely weakly with normal matter; it does not emit light, and light passes through dark matter without being scattered or absorbed. Therefore, it is challenging to detect and study dark matter directly, even though there should be lots of dark matter around. Many groups worldwide are building large detectors hidden underground to detect dark matter directly, with the hope that once in a blue moon, a dark matter particle scatters with the normal matter in the detector. While experiments like Xenon1T have seen some interesting possible signals, no conclusive detection has been confirmed yet. Other groups try to produce dark matter in high-energy proton-proton collisions using the Large Hadron Collider (LHC) at CERN, the most powerful particle accelerator in the world. However, the detectors at the LHC were not designed to detect dark matter directly. Physicists could register dark matter production only by noticing the missing energy and momentum since the dark matter would escape the detectors carrying some energy and momentum (Fig. 7). So far, direct detection and production experiments have put more and more constraints on dark matter properties such as its mass and interaction probability. Still, there's no sighting of dark matter yet. 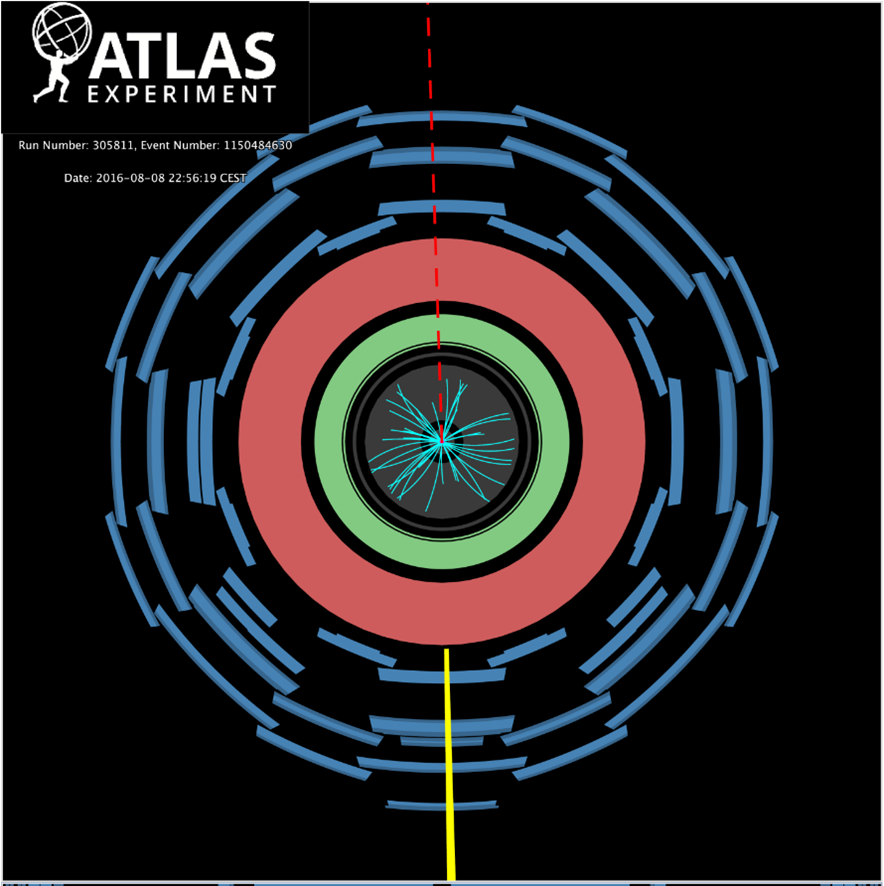 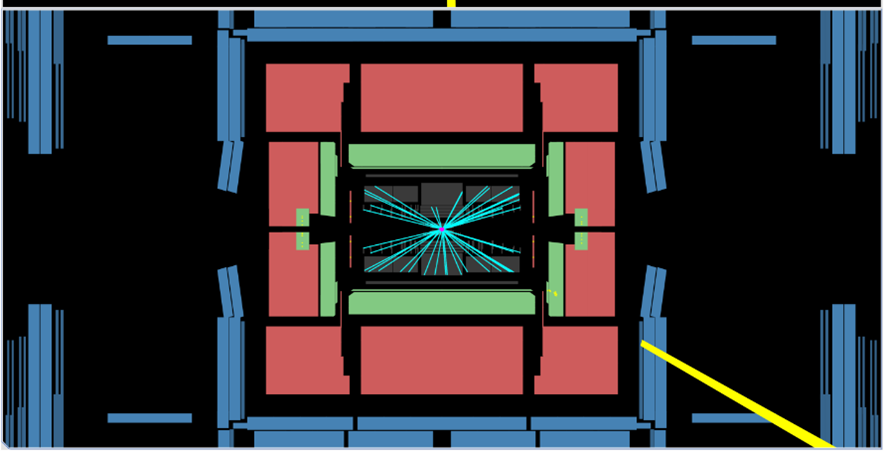 Fig. 7 An ATLAS detector event (cross sectional view on left and side view on right) with missing momentum/energy. A photon with some detected momentum (yellow line) is balanced by the missing momentum (red dashed line) possibly carried by a dark matter particle. (Image: ATLAS/CERN)

My students and I have also been working hard to study dark matter. How can one study invisible matters? Well, visible matters should reveal dark matter's presence and properties. In other words, normal matters – stars, galaxies, etc. – are nature's dark matter detectors.

In standard astronomy textbooks, there is a detailed discussion of the structures of stars and their evolutions, but dark matter is ignored. What would happen if some dark matter got admixed into stars? We can calculate how stars evolve if they are admixed with different kinds and amounts of dark matter. In particular, many stars die as compact stars – white dwarfs, neutron stars, and black holes, which pack about a solar mass into spheres with radii of a few thousand, tens, and a few km, respectively, reaching extraordinary densities and strengths of gravity. There are many such interesting objects in the Milky Way. For example, Sirius is the brightest star in the night sky (Fig. 8), and its companion star, Sirius B, is a white dwarf with a mass about the same as the Sun but the size of Earth. We found that if dark matter consists of massive particles (protons or heavier), just a few percent of a solar mass of dark matter admixed into a white dwarf will shrink the star from Earth-sized to Moon-sized!

Furthermore, there is a maximum mass for white dwarfs, calculated by Chandrasekhar as a teenager to be 1.4 solar mass. A white dwarf reaching this Chandrasekhar limit would become unstable and explode as a Type IA supernova (SNIA). Supernovae are among the most powerful explosions in the universe. The brightness of SNIA changes rapidly in days, called the light curve, and is believed to be universal and standard since all SNIA start from the same initial condition, that of a white dwarf with 1.4 solar mass. We found that the admixture of a small amount of heavy dark matter would significantly reduce the Chandrasekhar limit, and the SNIA would be much dimmer. Our model could fit the light curves of some of the peculiar SNIA observed (Fig. 9). 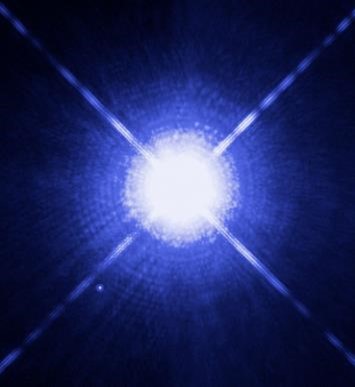 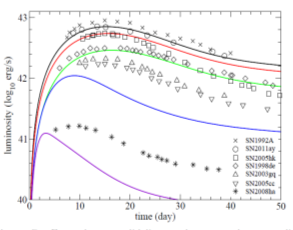 In theory, a white dwarf can also go through gravitational collapse to form a neutron star if the electrons in the star are captured by the atomic nuclei fast enough. This so-called Accretion-Induced Collapse (AIC) has not been conclusively observed yet. We studied how dark matter admixture would affect AICs. We predicted the gravitational wave and neutrino signals of such events using simulations to give suggestions for identification of AICs, with and without dark matter admixed, in future observations.

On much larger scales, dark matter provides the gravity to form structures in the universe. Large-scale simulations of structure evolution have demonstrated the

model, in which the dark matter is stable and 'cold,' or with small velocity dispersion, predicts large-scale structures that agree well with observation (Fig. 10). However, in recent years, there have been discrepancies between this model and observations on small scales. Therefore, many physicists are now searching for alternative dark matter models. 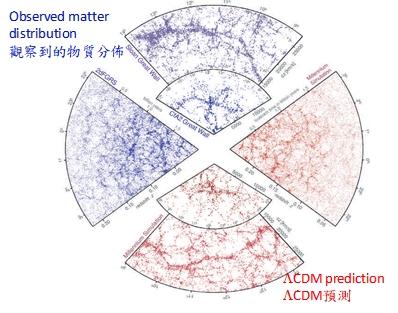 Fig. 10 Comparison of observed large-scale matter distribution in the universe to simulation result based on the

We performed large-scale simulations to study how different dark matter properties affect the structure evolution in the universe. Using models such as the

, Decaying Dark Matter (DDM), and Fuzzy Dark Matter (FDM) models, we can simulate how dark matter haloes are formed and study their structures. We can then compare our theoretical results with observation to test dark matter models (Fig. 11). There will be many breakthroughs in dark matter research in the coming years, and these will likely bring even more new mysteries. We are only at the beginning of human beings' quest to understand the matter and structures in the universe.

So next time you gazing at the starry night, remember that what you can see is just the tip of the iceberg. There is much more to discover in the future!