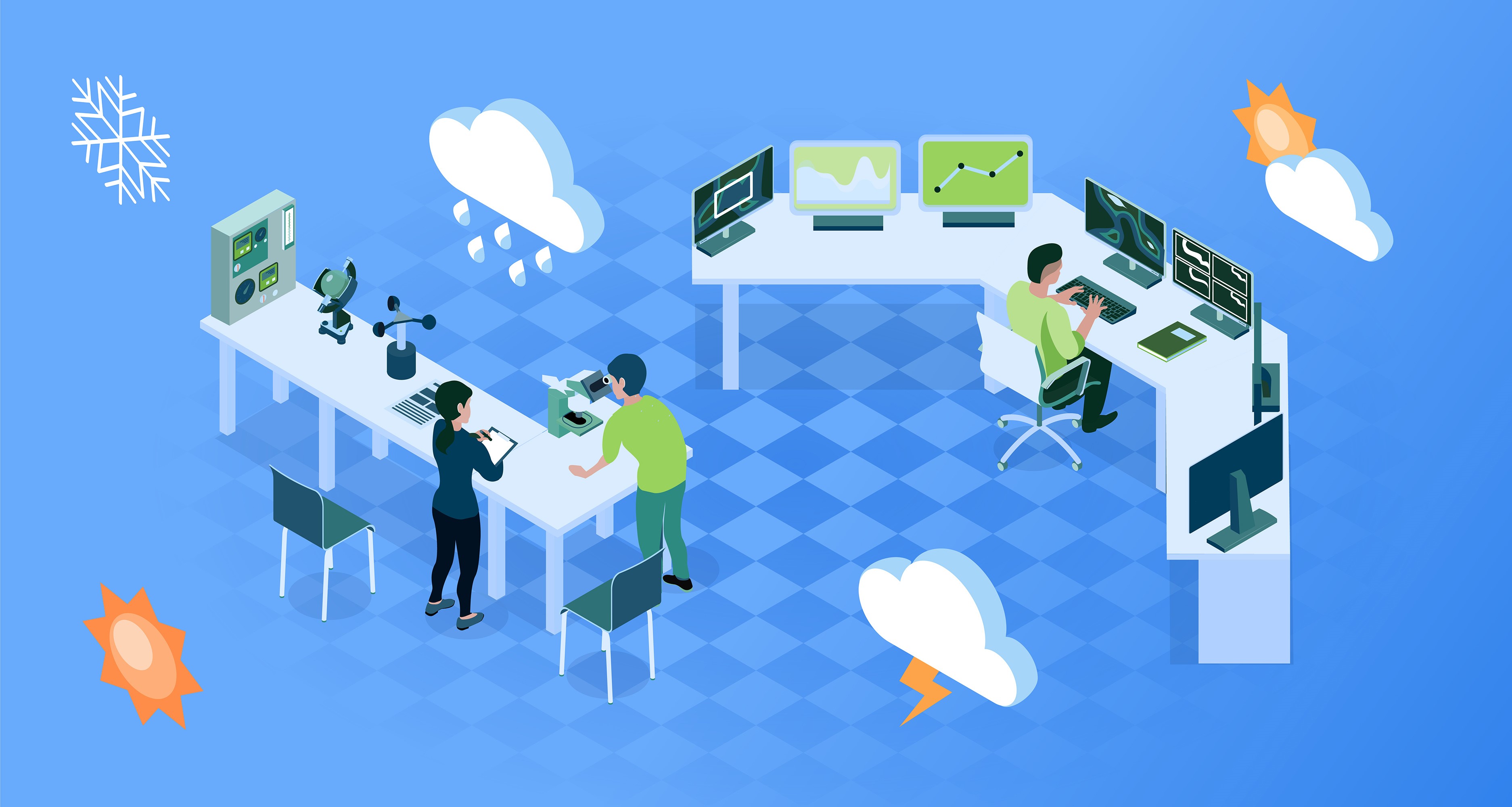 Since ancient time, human’s livelihood is tightly related to weather. Farmer’s harvest depends on weather. As early as in the Shang Dynasty (13th century BC), there were written records of weather observations and weather predictions on oracle bone inscriptions. Studies indicated that in 1217 BC, China not only had 10 consecutive days of actual weather records, but also made 10-day weather forecast, which exemplified the importance of weather in ancient times.

In the ancient article called "Lunheng·Mingyu" (論衡·明雩; about 88 AD), there was a story about Confucius (孔子) forecasting weather:

Confucius went out and asked Zilu (子路) to bring along rain gear. After a while, it really rained heavily. Zilu enquired the reason for the forecast. Confucius said: "The moon was close to the location of Net constellation (畢宿) last night." The Net constellation is one of the twenty-eight constellations (二十八星宿) in ancient China, and is located in Taurus. Ancient people observed the relative position of the moon and the constellations to infer weather changes. This was based on experience accumulated through long-term observations. Ancient people considered the Net constellation as the "rain" constellation. This is exactly the origin of Confucius’ prediction of rain. Apart from observing the constellations, people in ancient time also predicted weather based on the 24 solar terms (二十四節氣). For instance, near the end of the Eastern Han Dynasty (東漢), Zhuge Liang (諸葛亮) "borrowed easterly winds" to set Chibi (赤壁) on fire, defeating the Cao (曹) fleet. This was made possible by using the pattern of local weather changes around the time of winter solstice to predict the timing of easterly winds. Moreover, through years of observations, farmers have come up with many easy-to-remember agricultural proverbs to help predict weather. 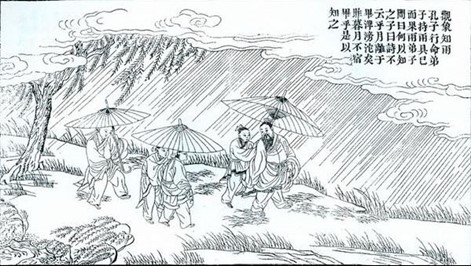 Agricultural proverbs are wisdom of life handed down from generation to generation, and many of them are about weather or climate. Many agricultural proverbs concerning weather can be explained by science. For example, "if there are swells while winds are calm, typhoon will come by in three days" (無風起橫浪，三天台風降). The scientific explanation for that is: high winds near a typhoon’s centre induce big waves. These big waves travel faster than the typhoon and gradually move away from the typhoon’s center to form the so-called swells. Before a typhoon comes, swells will arrive first, thus creating the situation where swells are seen before arrival of a typhoon. Another example of a weather-related agricultural proverb is: "rainbow in the east will be followed by sunshine, while rainbow in the west will end up in rain" (東虹日頭，西虹雨). Rainbow is an optical phenomenon caused by refraction of sunlight through small water droplets in the air. The prerequisite for rainbow in the east is that there is rain in the east while sunny in the west. Sunshine from the west hits the small water droplets in the east and got refracted to form rainbow. As weather system generally moves from west to east, the rain area in the east will continue to move further away to the east, resulting in improvement in local weather. On the contrary, when rainbow appears in the west, the sun shines from the east to rain area in the west to form rainbow. The rain area in the west will move east closer, thus bringing rain to the local area. The situation described in this agricultural proverb is very similar to that in another agricultural proverb, "don’t go out in morning sunglow; travel thousands of miles in evening sunglow". Both proverbs suggest the ideal time to go outdoor. Of course, the above several weather-related agricultural proverbs only describe the general situations, and there can still be exceptions. 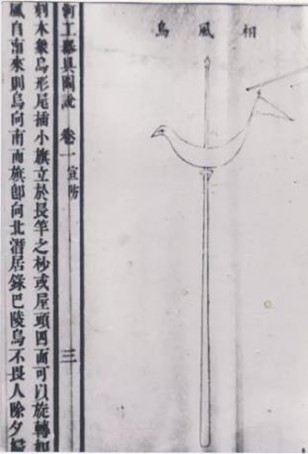 As we all know, the land area in the earth only accounts for about 30% of the global surface area. Making weather observations only at land stations is somewhat inadequate. After the Second World War, remote sensing technology continued to develop. First, there came weather radar which could detect the location and direction of movement of rain areas within one to two hundred kilometres. Then, there were meteorological satellites which capture the distribution of clouds across the whole earth from space and is nowadays indispensable for weather observation. 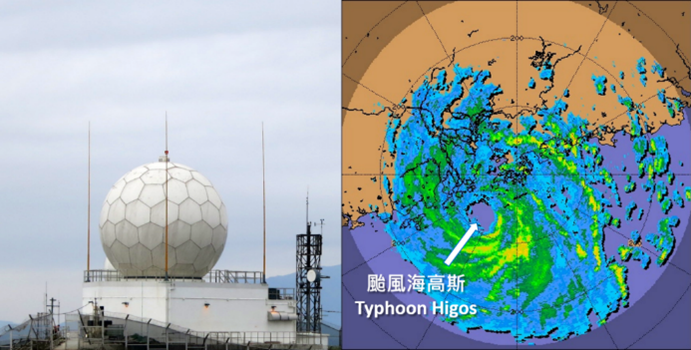 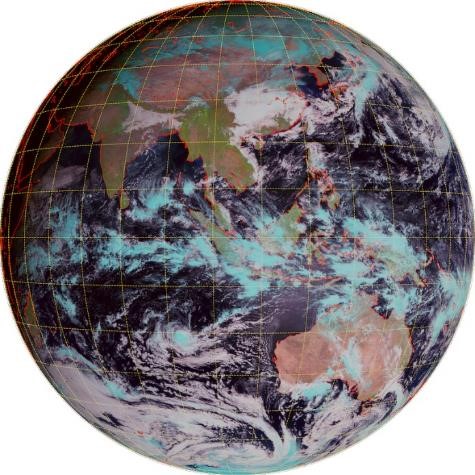 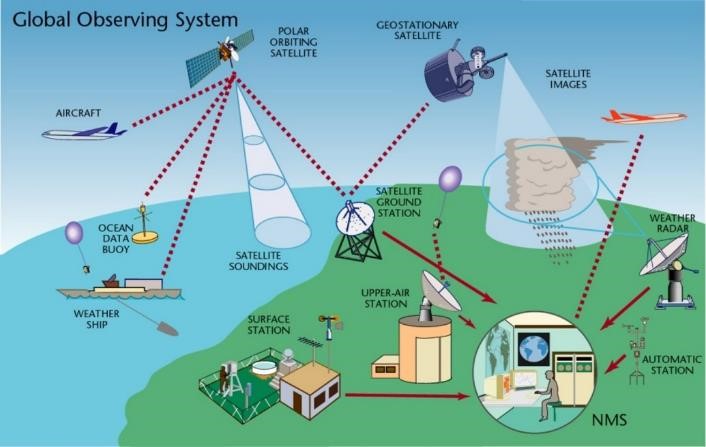 With weather observational data, weather maps can be produced to track the movement of weather systems and to predict weather. On a weather map, the locations of high and low pressure areas (including tropical cyclones) can be identified based on surface air pressure data, and cold or warm fronts can be located based on temperature and cloud cover data. From consecutive weather maps, one can track the direction and speed of movement of weather systems such as high-pressure areas, low-pressure areas, cold fronts, and warm fronts, so as to assess the local weather changes brought by these weather systems. For example, when a cold front arrives, the temperature drops significantly, and when an area of low pressure moves close, it often brings along rain or even thunderstorms. Before radio became popular, it was difficult to collect observational data from different places in real time. Therefore, when weather maps emerged in the early 19th century, they were drawn afterwards. 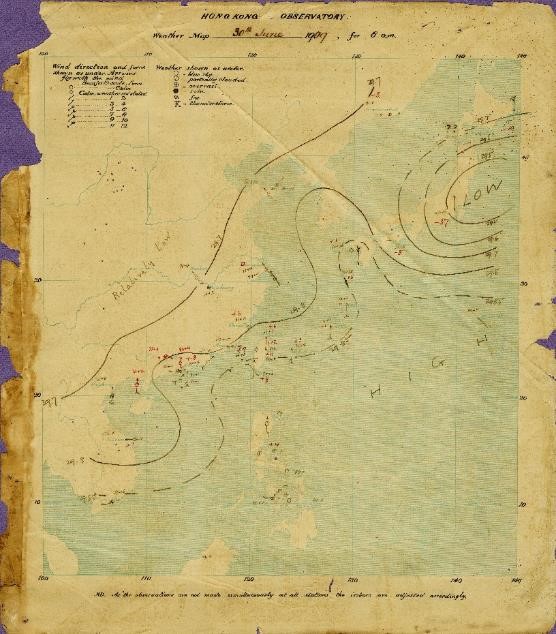 Nowadays we rely on computer models to make weather forecasts. The technology concerned is called numerical weather prediction. First of all, weather observational data are collected. Then computers are used to analyse the current weather conditions (technically called "initial conditions"). Thereafter the evolution of future weather is calculated in accordance with the laws of physics. The results of calculation from the computer models are then used to generate the forecast maps that represent the future weather. 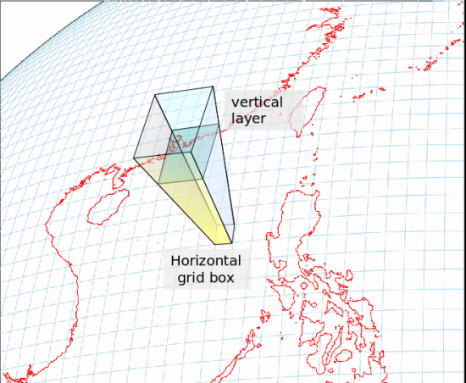 Although the technologies in weather observation are rather advance nowadays, the data so collected nonetheless do not fully cover every corner of the entire three-dimensional atmosphere, especially above the ocean and in the upper-air. Therefore, the initial conditions generated from incomplete observational data cannot fully represent the actual initial conditions. As there is some degree of error in the initial conditions, the future weather conditions calculated based on the laws of physics are not immune to errors.

In addition, the atmosphere is a chaotic system. I believe everyone has heard of the butterfly effect. Edward Lorenz, the founder of Chaos Theory, once said: "Will a butterfly flap its wings in Brazil cause a tornado in Texas?" This actually means that a small change in the air flow initially (flapping of butterfly wings) may become larger and large in time (tornado). This may sound a bit exaggerated, but it actually means that in a chaotic system, slight error at the beginning will grow with time. Putting this to a computer model, error, however small initially, may increase with forecast time. When the forecast error increases, the accuracy of forecast will decrease. This is precisely the limitation of computer model forecasting, and it is also a major challenge in weather forecasting. 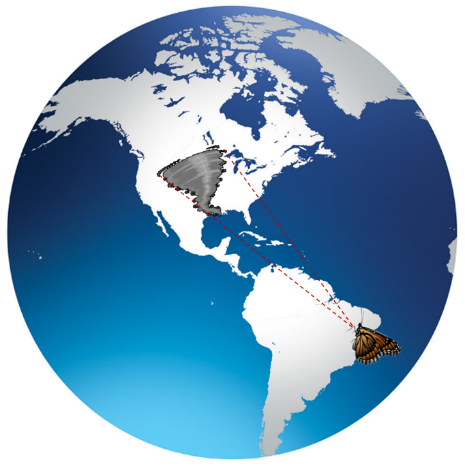 Schematic diagram of butterfly effect. A change in the airflow from flapping of butterfly wings may evolve into a tornado.

Two to three decades ago, the computer forecasting technology was less sophisticated than of late. Weather data collected then were also less than those now. The forecast period of computer model was not long, just about two to three days. The amount of weather data collected in recent years has increased geometrically. The error in initial conditions analysed based on larger amount of data is smaller than before. The forecasting period of computer model has also increased substantially. Even so, the forecast error of computer model yet exists and will still increase with time. 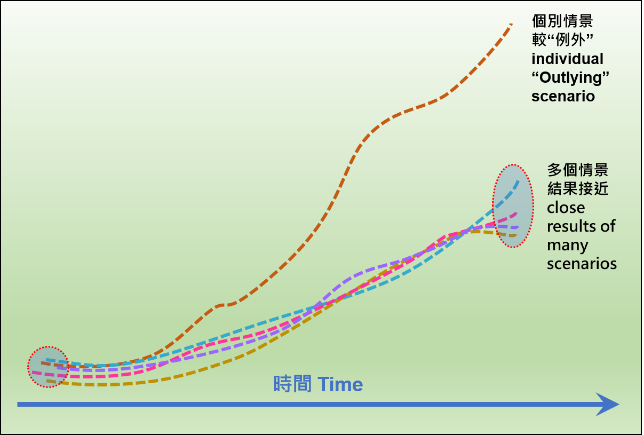 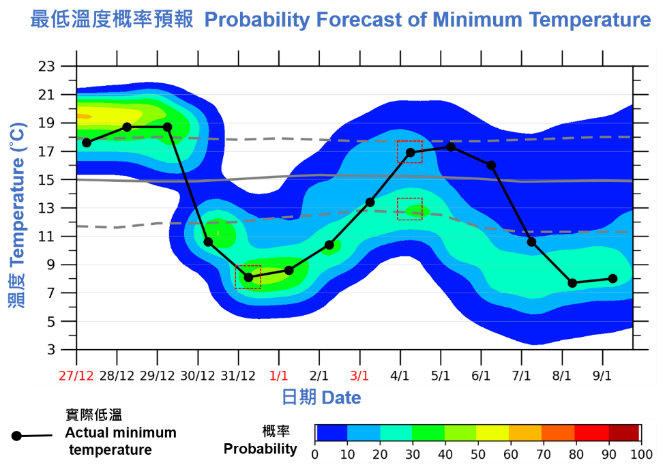 With the development in weather observations and computer modelling, the forecast accuracy nowadays is higher than before. However, the atmosphere is a chaotic system. It still comes with uncertainty in the evolution of weather, and poses a big challenge to forecasters. While ensemble forecast allows us to better understand the probability of forecast, enhancing the confidence of forecasters, uncertainty in forecast still exists. In recent years, many researches have been made in the application of artificial intelligence in weather forecasting, especially the use of deep learning methods. Whether or not artificial intelligence can unlock the curse of chaotic system? We will wait and see.