Climate Change and Its Impacts to Hong Kong

It is well-understood that climate change is caused by release of greenhouse gases into the atmosphere, a phenomenon also known as carbon emission. It is estimated that owing to COVID-19, the global carbon emissions in 2020 may drop by 4-7 percent. While the unprecedented COVID-19 pandemic has not come to an end, and the world is seeing major downturn of economy, does the COVID-19 pandemic help to alleviate the negative impacts of climate change? According to the World Meteorological Organisation (WMO), such a level of reduction of emissions does not mean that carbon dioxide concentration in the atmosphere will go down1. On the contrary, the carbon dioxide will continue to accumulate and the level will just increase a little less than without this reduction. As a matter of fact, the monthly mean carbon dioxide concentration measured at Mauna Loa in Hawaii in May 2020 was the highest in record for the month of May2. Accompanying this, the global mean temperature in May 2020 was also the highest in record for the month of May. As such, the Secretary-General of WMO said that the economic and industrial downturn as a result of the Coronavirus pandemic was not a substitute for concerted and coordinated climate action. 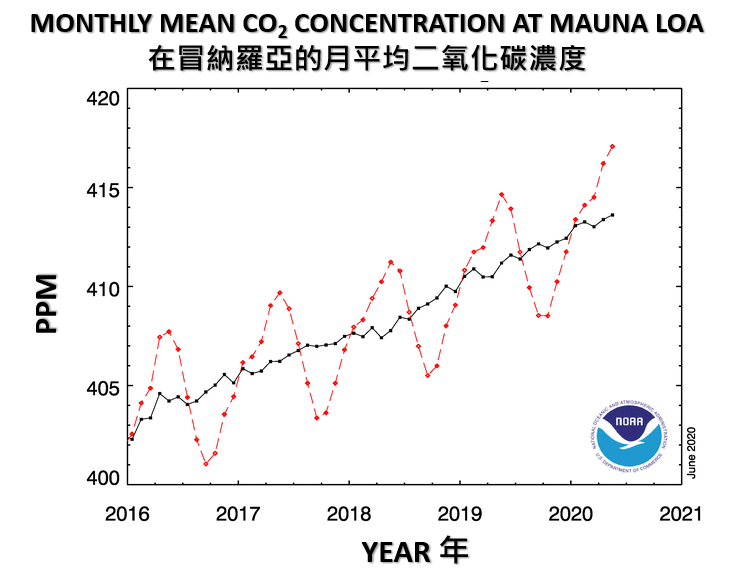 Accumulation of greenhouse gases in the atmosphere is the cause of climate change. Greenhouse gases act to trap infrared radiation coming from the Earth, thereby keeping the Earth “warm”. In fact, without greenhouse gases, the Earth would have had an average temperature of -18°C instead of the present 15°C.

According to Intergovernmental Panel on Climate Change (IPCC), it is “95 percent certain that humans are the main cause of current global warming”3. There is scientific evidence to support this claim. Scientists performed computer climate models to simulate the variation of global mean surface temperature in the past based on two different scenarios. One scenario considered only natural factors such as variation of Earth’s orbit, past solar activity and volcanic activity. The other scenario considered not only natural factors, but also human factors such as changes in greenhouse gas concentration, land use and man-made pollution. The result was that the simulation based on natural factors alone was not able to reproduce the observed global warming. The simulation based on both natural and human factors matched well with actual observations. This suggested that human factors contributed to global warming.

What are the impacts of climate change? 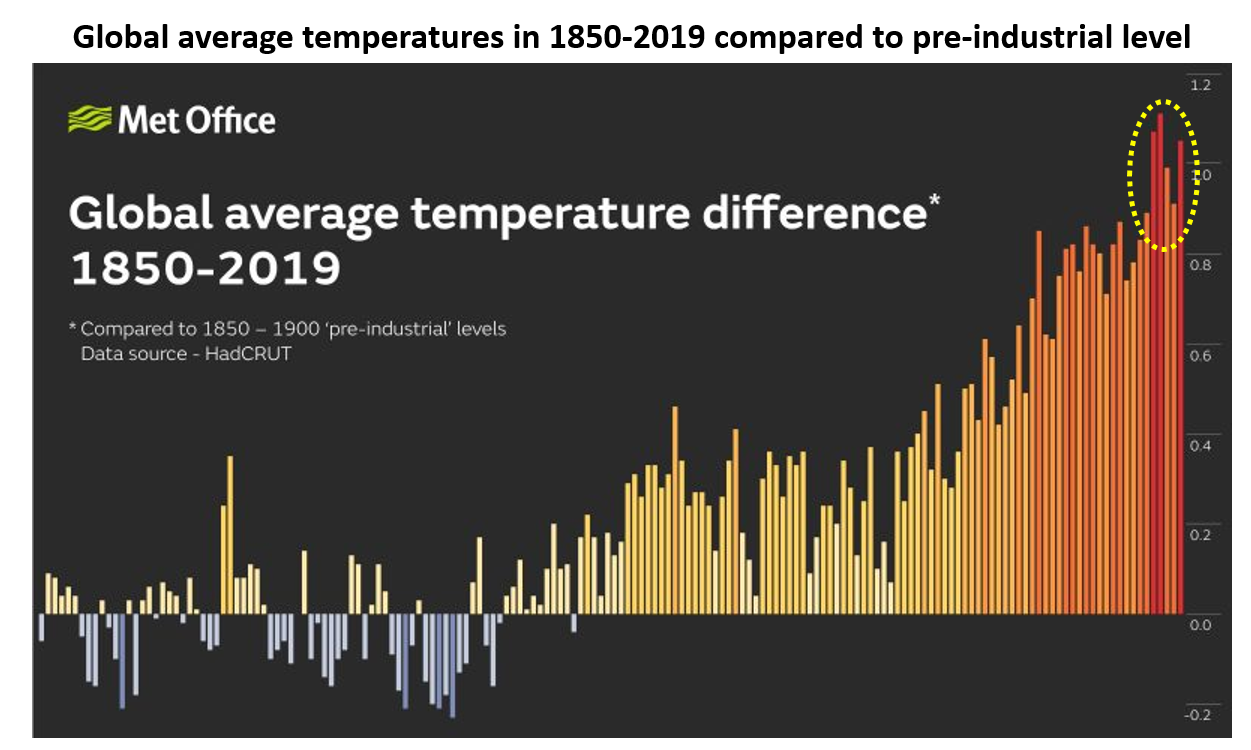 With increase in air temperature, the atmosphere can hold more moisture according to physical law. More moisture in the atmosphere means heavier downpour when it rains. Global warming causes the ocean to warm up as well, thereby expanding its volume. Global warming also leads to melting of glaciers and ice caps, particularly the Greenland and Antarctica ice sheets. These factors together cause a rise in global mean sea level. 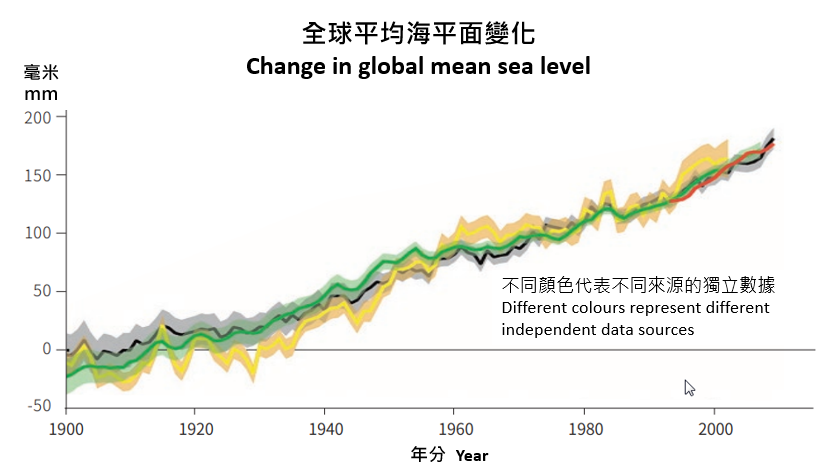 Studies reviewed that the number of tropical cyclones in the Western North Pacific will not increase as a result of global warming. Despite this, tropical cyclones can develop more intensely under global warming, and therefore potentially bringing greater risks from their high winds. This, coupled with the trend of rising global mean sea level, will increase the threat of storm surge from tropical cyclone to coastal cities like Hong Kong.

Storm surge is a rise in sea level due to the combined effects of high winds and low atmospheric pressure associated with tropical cyclones. High winds from a tropical cyclone help push sea water towards the coast, thus piling up water against the coast. On the other hand, the rather low pressure near the centre of a tropical cyclone has an effect of sucking up sea level. These two effects in tandem cause momentary rise in sea level, which is storm surge. This rise is on top of the normal astronomical tide and the effect of climate change. People in Hong Kong may recall the occasion of Super Typhoon Mangkhut in 2018, the maximum storm surge in the harbour then was 2.35 metres, the highest so far on record in Hong Kong. Many low-lying coastal areas in the territory suffered from inundation.

In case the time of the maximum storm surge coincides with the time of the highest astronomical tide, the sea level will rise higher, bringing inundation to a greater area near the coast. With the effect of global warming, the mean sea level will continue to rise in future in background. We may expect more frequent and widespread inundation caused by storm surge in future. 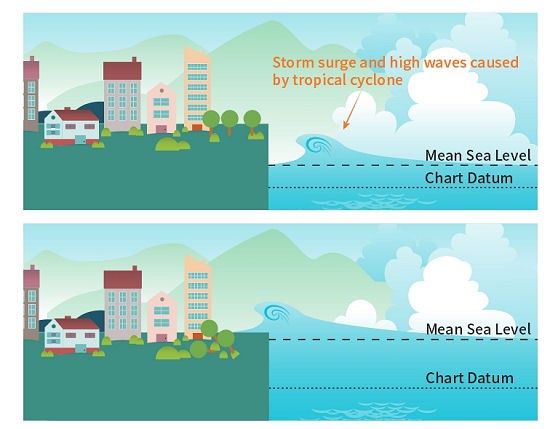 Under the combined effect of climate change and urbanisation, the annual mean temperature in Hong Kong exhibited an increasing trend, just like other cities around the world. There was an average rise of 0.13°C per decade from 1885 to 2019. The rate of increase became faster in the latter half of the 20th century at an average increasing rate of 0.21°C per decade during 1990-2019. 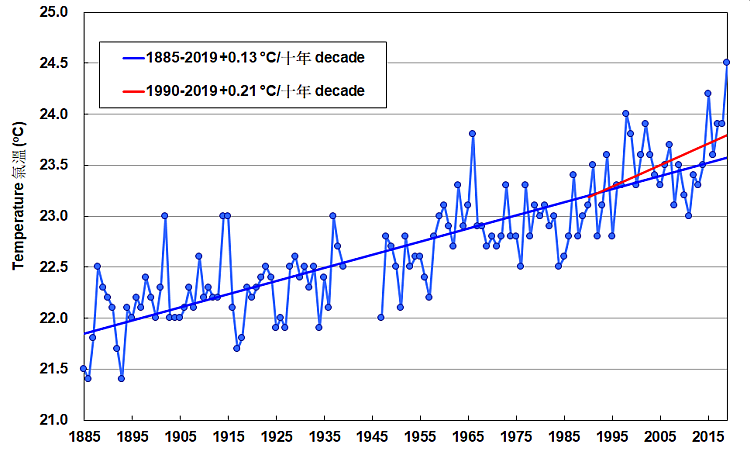 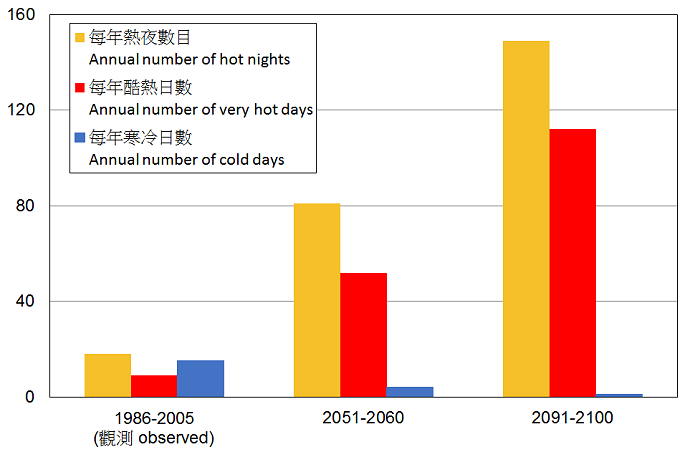 Global warming favours heavier rain. In the high rate of greenhouse gas emission scenario, the number of extremely wet years (with annual rainfall exceeding 3,168 mm) in Hong Kong will increase from 3 in 1885-2005 to about 12 in 2006-2100. Meanwhile, the number of extremely dry years (with annual rainfall less than 1,289 mm) in Hong Kong would remain about the same at 2. Thus, we would witness a shift towards wetter years in future. More heavy rain will increase the risk of rain-related hazards such as thunderstorm, landslip and flooding. That means, global warming may trigger more multi-hazard situations. That is really worrying. 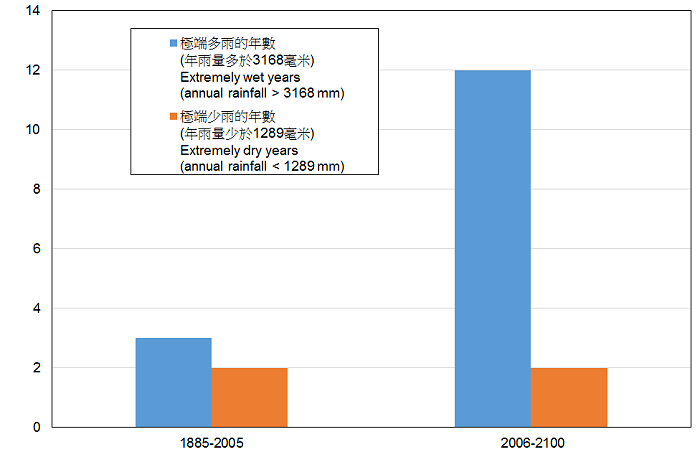 Based on the tide data collected in the Victoria Harbour from 1954 to 2019, the mean sea level in the harbour rose at a rate of 31 mm per decade. In the scenario of high rate of emission of greenhouse gases, the mean sea level will increase by about 0.98 m above the average of 1986-2005 by the end of the 21st century. Such a rise in sea level will increase the risk of inundation to the low-lying coastal areas in Hong Kong due to approaching tropical cyclones in future.

The 13th goal of United Nation’s Sustainable Development Goal4 is to “take urgent action to combat climate change and its impacts”. Even though greenhouse gas emissions are forecast to drop in 2020 owing to travel bans and economic downturn associated with the COVID-19 pandemic, this reduction in emission is only temporary. Climate change is not on pause. Adopted in 2015, the Paris Agreement called for joint efforts to keep a global temperature rise this century well below 2°C above pre-industrial levels, and better keep it within 1.5°C. We are now more than 1.1°C above pre-industrial level. More efforts need to be devoted to achieve this goal. So, let’s join hands together to reduce carbon emission and to cut down consumption of electricity and water. Every bit counts!

Director of the Hong Kong Observatory