In the last issue of our newsletter, we mentioned that China, the United Arab Emirates and the United States launched their probes in July 2020 to carry out Mars missions during the best launch window. The successful launching of those probes marks the beginning of their Mars missions. Let’s explore more about missions to the red planet.

What is a “Mars launch window”?
The revolution periods of Mars and that of Earth are not the same. Mars launch window refers to the period of time that the orbital distances of the two planets are the closest. As such, the navigation time of probes launched during this period can be shortened. This year (2020), Mars opposition will occur on 14 October, the orbital position of Mars, Earth and the Sun will be in a straight line and the distance between the red planet and Earth will be at the closest. Therefore, it is the most suitable juncture to carry out Mars missions. Considering the distance between Mars and Earth and revolution speed of these two celestial bodies around the Sun, the best Mars launch window was July to mid-August in 2020, around two months before the Mars opposition. This Mars launch window only happens once every 26 months. We will need to wait for at least two years before the next launch window. Therefore, all countries would endeavour to launch their Mars mission during this period of time.

The probes take at least seven months of navigation to reach Mars. It means that these probes will land on Mars in February 2021.

Navigate to Mars
The closest distance between Earth and Mars is about 55 million kilometres while the furthest can be more than 400 million kilometres. To increase the chance of success, fuel is always a vital factor for Mars mission. Apart from launching the probes during the best launch window, scientists need to reduce the size and weight of the probes so as to save fuel that probes use and carry. German engineer Walter Hohmann deduced “Hohmann transfer orbit” by mathematics, which has made an important contribution to the understanding of orbital dynamics and space navigation.

“Hohmann transfer orbit” is a way of changing orbit. During the first acceleration, the spacecraft first transfers from its original orbit to an elliptical orbit. When it reaches the apsis of the elliptical orbit, it accelerates again and enters the target orbit. During the navigation in space, transferring orbit consumes a lot of fuel. If a Mars probe utilizes the Hohmann transfer orbit to navigate, it only needs to accelerate twice to transfer orbit for entering the Martian orbit after launching, so it greatly saves navigation time and fuel needed. 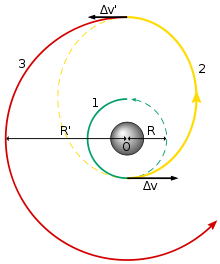 In the history of Mars exploration, about half of the missions failed. We hope that Mars exploration now underway will reach a new milestone in the year of the red planet.